Rapture Rejects offers the player a variety of weapons fit for many play styles. Whether players excel at long-range, short-range combat, or something in between, one is able to decide how they want to shoot their friends.

- Weapons you pick up go into Weapon Slot 1, first.

- Weapons use two types of ammo, trash or scrap.

- The moment you pick up a gun you need to load it with ammo. (Press R)

- Ammo can be found on the ground, in loot boxes, or near the corpses of your enemies.

- The moment you get a second gun it is placed in the Weapon Slot you aren't using. From then on, if you pick up a gun it swaps it with the gun you are using.

- You also have use of your fists until you pick up guns. (Left Click)

- Some weapons have an Alt Fire (Right Click), it would serve you well to learn them.

You ever get so angry you just punch shit? That's probably why you didn't make it into Heaven.

You start with this as your default weapon slots.

Decent damage if you have nothing else though it is easily overpowered by most guns. No Alt Fire.

The moment you get two guns, you can forget about those nubs you've been using to punch with. No really, it seems like you will forget how to punch as your hands are immediately replaced with weapons.

If you ever run out of ammo, you can (Right Click) a weapon slot to drop your weapon. You can't use a melee attack if you have a weapon equipped.

"Band camp always did traumatize me."

"You stuffed knives in a toaster. Please, stay away from me."

-Alt Fire is a Rocket Jump! You can jump over certain walls, terrain, and through windows!

"I can see why you didn't make it into Heaven with this thing."

-Alt Fire is a Zoom Out, you can slow walk while zooming but you can't run. Holding down the Alt Fire charges up a powerful shot in 2 seconds

-12 damage per shot, someone just jammed CD's into a gun

"This is what you should do when someone asks for a pencil."

-Alt Fire is an automatic reload, no delay

"I'm here to kick ass and chew bubblegum, and I brought a whole lot of bubblegum."

"Remember, AR stands for Always Recycle. Or was it always reload?"

-Alt Fire is the compost ability. It lets you suck in enemy bullets to refill your gun. (3 seconds) 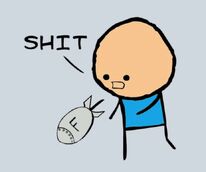 "You better not drop it!"

-Takes about 8 seconds to recharge, has infinite uses

-Found on the ground

-Hold to turn yourself into a random item from the map. Allows you to hide from your enemies!